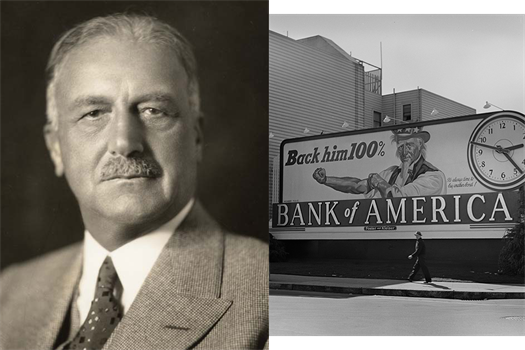 A History of Innovation

Born in San Jose, CA in May 1870, Amadeo P. Giannini succeeded as a young man in the wholesale produce business, but grew bored.  Angered by the era's typical banking practices -- making loans to and servicing only wealthy clients -- he founded the Bank of Italy in San Francisco in October 1904 as an institution for the "little fellows" -- the hardworking immigrants other banks would not serve.  He offered those ignored customers savings accounts and loans, judging them not by how much money they had, but by their character.  Within a year, deposits soared above $700,000 ($13.5 million in 2002 dollars)1.

After a disastrous earthquake and subsequent fires levelled much of the city in 1906, Giannini set up a temporary bank immediately, collecting deposits, making loans, and proclaiming to all that San Francisco would rise from the ashes.  He based his business on openness and trust, making his reputation by helping the city rebuild1.

In keeping with this history, TFA strives to serve people from all backgrounds, and help them in their pursuit of a lifetime of financial security.  Together with Transamerica and Aegon N.V., we have helped over 29 million customers, manage over $920 billion of investments, and employ more than 26,000 people around the world2.

History of the Transamerica Pyramid

Bank of Italy: Amadeo P. Giannini founded the Bank of Italy in a converted San Francisco saloon to make financial services available to everyone.

Confidence: Giannini expanded the Bank of Italy across California, breaking with an American tradition of independent local banks by providing his egalitarian banking services to the "little fellows" in the Yugoslavian, Russian, Mexican, Portuguese, Chinese, Greek, and other immigrant communities. By the mid-1920s, he owned the third largest bank in the nation.  And in 1928, Giannini put his banks into a giant holding company he called Transamerica Corporation, reflecting his new ambition.

Big Banker: Giannini formed the Bank of America, which would eventually become the largest bank in the United States.  As a measure of its success, it withstood the Great Depression, funding large industrial and agricultural interests as well as California's burgeoning movie industry and even the Golden Gate Bridge.  Later, Transamerica acquired the Occidental Life Insurance Company and renamed it Transamerica Occidental Life Insurance Company.

Globally Recognized: Giannini’s Bank of America would become the largest private bank in the world.

Changing Focus: Due to the Bank Holding Company Act, Transamerica had to choose whether to divest its banks or its non-bank investments.  Transamerica surprised the financial world and chose insurance.

Open for Business: TFA registered with FINRA, and started serving families. The firm was created to enhance the present and future economic well-being of its clients and Representatives.

Acquisition: Aegon N.V., a Dutch company, purchased the Transamerica Corporation for $9.7 billion in cash and stock becoming the third-largest life insurer in the United States in terms of assets and premiums.

Growth Through a Merger: TFA merged with InterSecurities, Inc. and grew to more than 1,700 registered representatives and $16 billion in client accounts.